About three months ago, I wrote the first part of what makes containers function the way they do. My primary motivation for this is because I think it isn’t highlighted nearly as much as it could be. I also could not fit everything into one single post as it was already rather lengthy, so now I will continue with walking through the remaining namespaces on the list.

As I stated in my earlier post, the concept of a container does not exist inside of Linux. A container is a term that is used to describe a combination of namespaces and control groups, which are Linux kernel features you can use to isolate processes from one another. Isolating a process this way is not an all or nothing approach as you can be very selective over what resources are isolated and which ones are not.

To get started, I will fire up a Docker container so I can perform my tests in a disposable environment. Everything I am about to do can also be done in a Linux VM. Please note that I am specifying the –privileged flag here since we will need some additional capabilities such as NET_ADMIN (specifically to perform various network-related operations). I highly recommend that you use a Linux Docker host, running kernel 5.6+.

To recap: a specific process can live in what is often referred to as a “virtualized OS”. This “virtualized OS” contains a new group of PIDs, a new set of users, a completely unshared IPC system, a dedicated network interface and its own hostname.

Namespaces are a Linux kernel feature that allows us to wrap global system resources in an abstraction layer. Doing so allows you to make processes, within the namespace, believe that they have their own isolated instance of the global resource. Changes to the global resource are visible to other processes that are members of the namespace but are invisible to other processes.

I’ve included an overview of the implemented namespaces and where it was, is or will be discussed:

System V IPC is the name given to three interprocess communication mechanisms that are widely available on UNIX systems since 1983: message queues, semaphore, and shared memory. POSIX message queues provide an alternative API for achieving the same result. POSIX stems from the single UNIX specification, which was created to standardise interfaces on UNIX-based systems, and is considered to be an improvement in both simplicity and functionality, over the System V standard.

All there is left to do is to compile the binaries from these files, you may need to pull in GCC with “apk add build-base”.

If you place a message in the shared memory you should be able to read from it, since both processes are being executed inside the same IPC namespace.

Now go back to your host machine and open a new terminal window, from there we will start another shell, which will run inside of the same namespaces as PID 1.

Via the unshare command, by default, a newly created namespace is automatically torn down when the last process, in the new namespace, terminates or leaves the namespace. Since our processA will exit once it has done its job, I decided to wrap it in another ash shell and have the shell start in a new IPC namespace. We can create as many processA child processes as we want, doing so will have them run in the new IPC namespace.

If we try to read the message from the shared memory, you will notice that it returns an empty string.

Next up, we want to make our containers more useful, from a networking perspective.

You can find these properties at “/proc/net”, which is a symbolic link to “/proc/$$/net”. Whenever a new network namespace is created, it is will get its very own loopback interface. From the shell with PID 1, let us begin by adding iproute2 to our Alpine container. This will make it a bit easier to work with various networking namespace related commands and we will need to do less switching between multiple shells.

To see this in action, type:

You will notice that eth0, a physical device, is missing. A physical network device is present in only one network namespace.

Once we enable the loopback interface, inside of our new network namespace, we can begin to use it.

With “ip netsn add” we can create additional network namespaces, without having to explicitly use “unshare”.

Veth devices are always created as a pair of devices in a tunnel-like fashion in order for messages, written to the device on one end come out of the device on the other end. You might guess that we could easily have one end in the initial network namespace and the other in our child network namespace, this way we can have inter-network-namespace communication. One end of the network pair will be plugged into a bridged interface, whereas the other end will be assigned to the target container.

We can prevent having to switch between shells with the ip netns exec command, which will execute a command in a specific network namespace. Veth1 will be moved from our initial namespace to the newly created mynetns.

In order to make our virtual Ethernet devices function properly, we still need to assign an IP and then enable both devices, in both namespaces.

To get a visual sense of what was created, have a look at the following diagram. eth0 and br-veth1 are part of the initial namespace, while veth1 is part of the network namespace with inode link 4026532384. br-veth1 and veth1 are a virtual Ethernet device pair. Don’t worry if you do not have any processes living in those networking namespaces at the moment, but know that they can live there.

If you add multiple network namespaces you will need to repeat the previous steps of adding the virtual Ethernet pairs.

If we update our visual overview, it ends up looking like this. 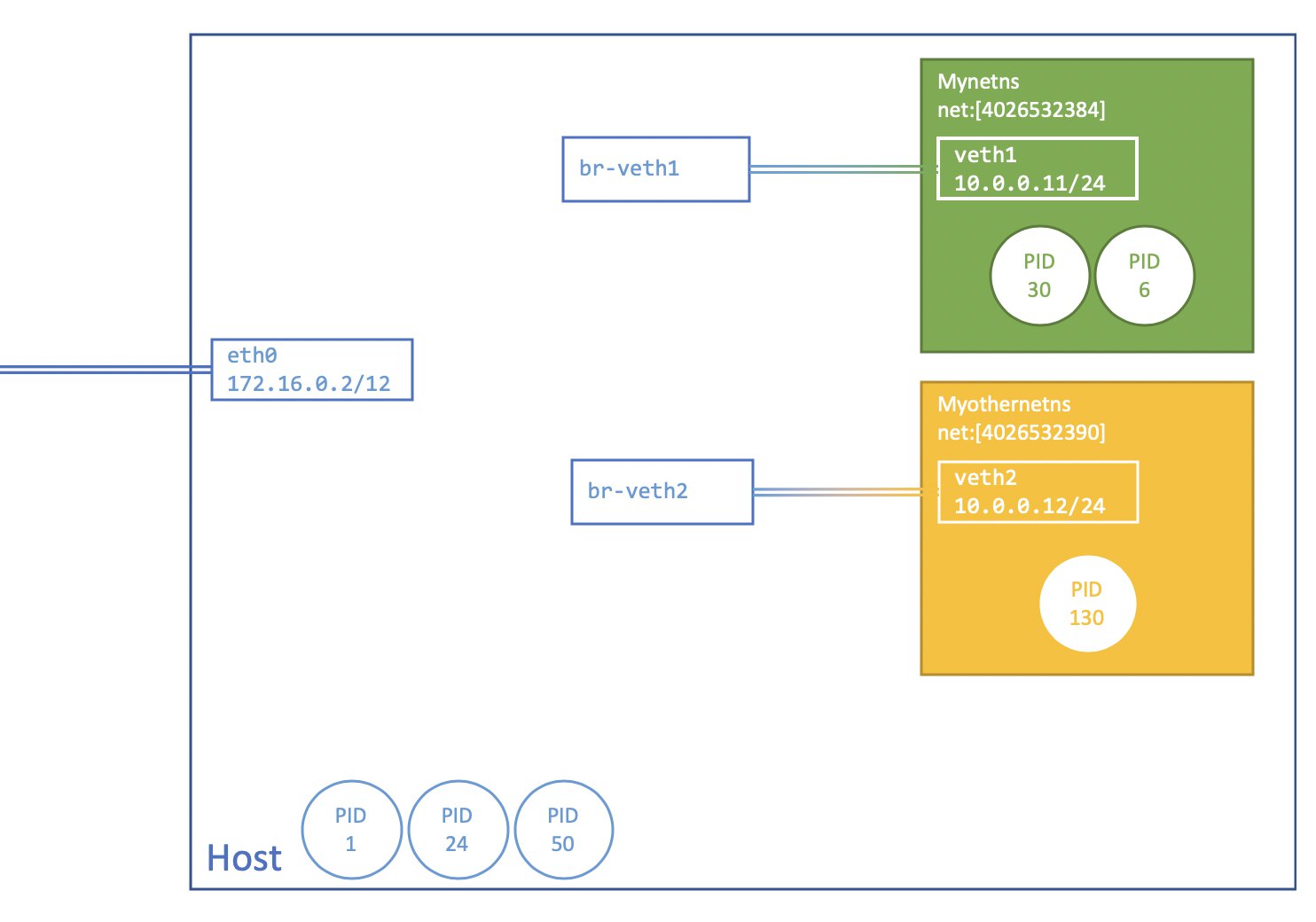 In case you would like processes in different networking namespaces to talk to each other, we will also need to create a network bridge. A bridge behaves similarly to a virtual network switch, real and virtual devices can be connected to the bridge. 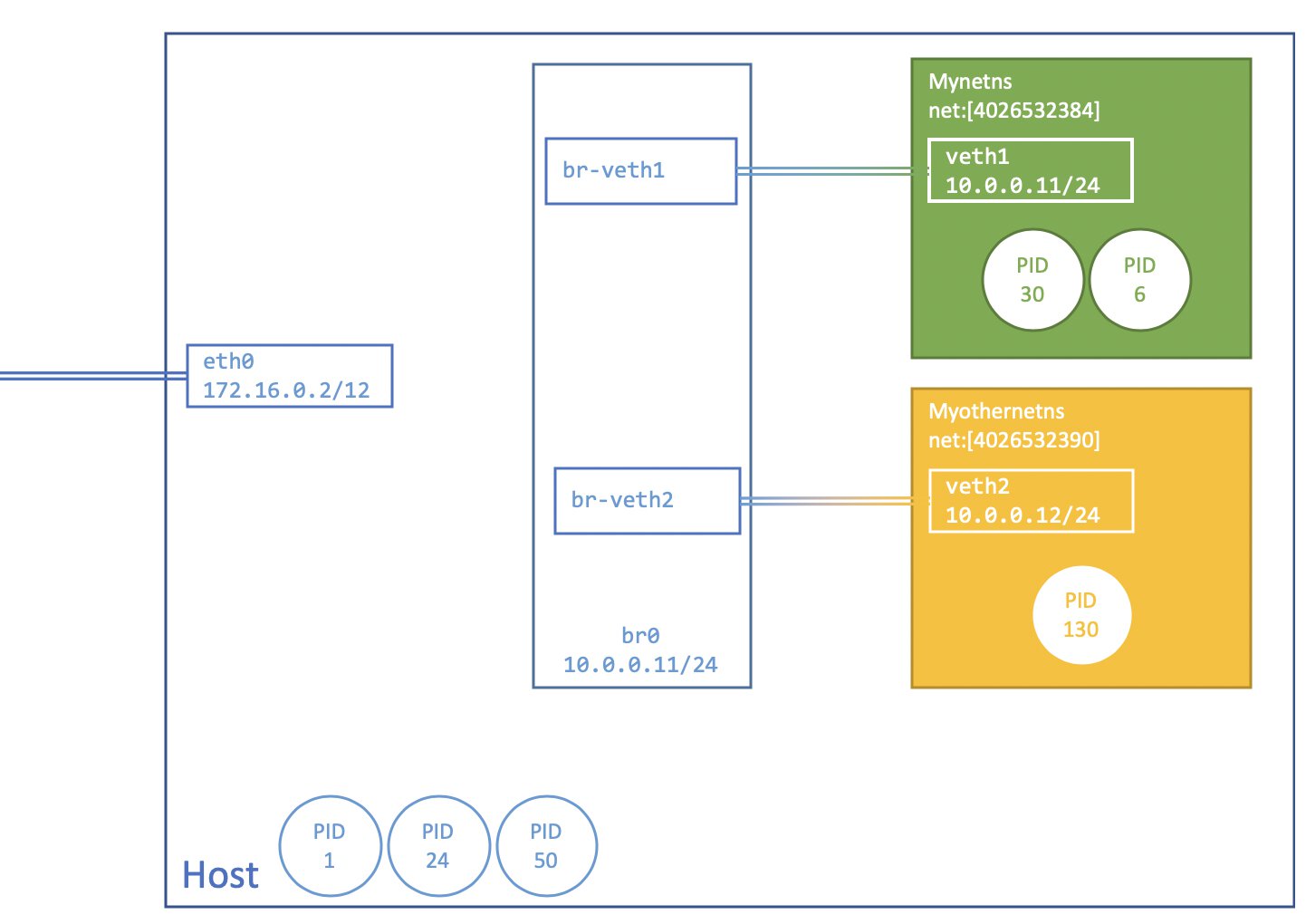 We should now be able to reach veth1 from veth2.

Currently, both our routing tables in the new networking namespaces do not have a default gateway set up. This means they cannot reach outside of the 10.0.0.0/24 range. Let’s fix that by ensuring that all packets, with destinations that do not match the other available routes, are routed to the bridge instead.

Packets sent over the bridge will be NATed by eth0 and sent out into the wild by using the host’s IP, as long as we have the proper settings enabled. 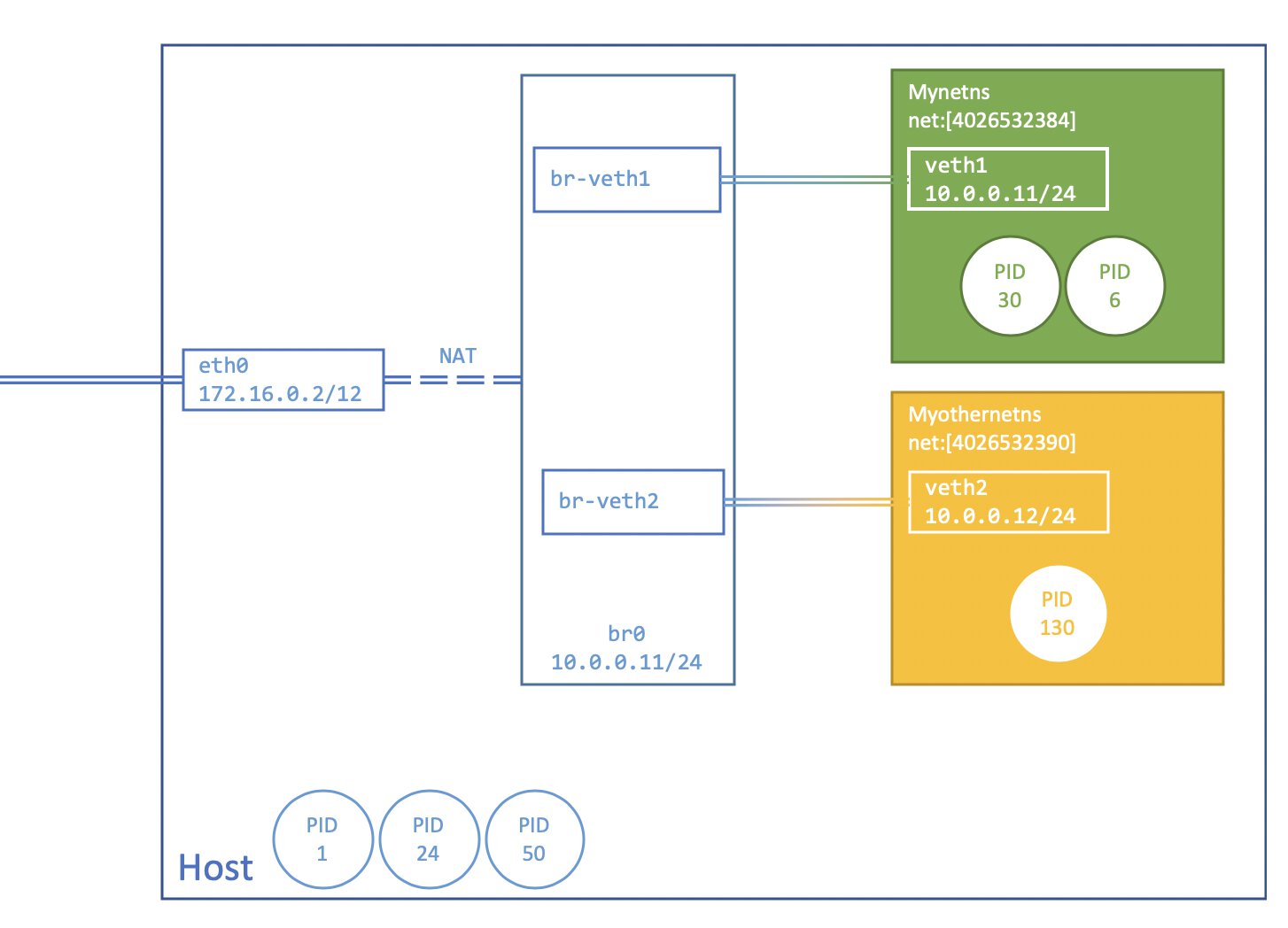 We should now be able to ping Google’s primary DNS servers from all available namespaces.

If you are unfamiliar with ip-netns it might seem as if there’s quite a bit of magic going on, allow me to clarify.

In part one, I spoke about how we can see the namespaces that our current process is a part of, by looking at the target of the symlinks found in “/proc/$$/ns/”. Each of these files can tell us which instance of a particular namespace type the process belongs to.

The contents of the symlink is always “ns-type: [inode-number]. If you have processes that have the same symlink target for a specific namespace type that means they belong to the same namespace type. If they do not match, they are in separate namespaces.

It appears we use “ip netsn add <NAME>” a new bind mount is created at “/var/run/netns/<NAME>”. “ip netns” holds on to network namespaces by mounting a reference to those inode symlinks. As soon as the bind-mount is removed, the network namespace is destroyed.

The time namespace was first proposed back in 2018 and entered the mainline kernel in the first second quarter of 2020 with Linux 5.6. Up until recently one thing that remained visible to every process on a host was the concept of the system time, now it is possible for a process to have its own instance of the time resource.

This allows for some, very specific, use cases. It will be particularly useful for container live migration scenarios such as CRIU. At a (very) basic level it allows you to set a specific date and time, with fewer impacted processes outside of the namespace. I mentioned ‘fewer’ because there are multiple system clocks and only two of them are virtualized.

CLOCK_REALTIME is not virtualized, so this means that you could potentially still impact the host if you were to set CLOCK_REALTIME through something like date(1).

I decided to update the unshare binary to version 2.36, which at the time was only available through the edge channel. Needless to say that you should not use this in production, but it should suffice our testing needs.

In order for the tests to work, verify that you’re running Linux kernel 5.6 or higher on the Docker host.

Every time namespace has offsets associated with it. These offsets are in respect to the initial time namespace, they define the values of the monotonic and boot-time clocks in that namespace.

We will apply a 24 hours time offset (86400 seconds) to CLOCK_BOOTTIME as we run ash in the new time namespace, this will cause uptime to effectively return a different result as opposed to when it is run in the initial time namespace.

The offsets are exposed via a file “/proc/self/timens_offsets”. After the first process has been created or if it has entered the namespace subsequent writes to this file will not work.

Inside the file the offsets are expressed, per line, in the following manner: <clock-id> <offset-secs> <offset-nanosecs>

The clock-ids aren’t too complicated to figure out:

When we return to our initial time namespace, we see that both the monotonic and boot-time clocks are unaffected after shifting the time offsets in the other time namespaces, which is exactly what we’ve come to expect!

The conclusion I wrote at the end of part one still holds up for part two. By writing and gathering all the information on this topic, I’ve learned to value the efforts that go into making container tools. There so many moving parts and intricacies that you need to take into consideration if you want to achieve process isolation. It’s still nice to know what’s going on behind all the magic!

Now on to part three.